On The Trail Or In Competition, Today’s Hatchets Are Multi-Purpose Must-Haves.

A hatchet is one of the must-have tools when heading outdoors. Lighter and more portable than an axe, which requires two hands to operate, hatchets lack the tactical elements of the modern tomahawk, which are often used by military and law enforcement types as a multi-purpose tool. This gives hatchet designers the ability to focus on a tool that will easily handle shelter- and fire-building chores with ease.

For instance, take the hatchet James Gibson designed and which is now offered by ESEE. A knifemaker, flintknapper, and bushcraft instructor, James originally designed the Gibson Axe for himself, something to throw into a backpack as he tramped the hills and hollers of East Tennessee. As he tweaked his design, eventually cutting out a prototype made from thin plywood, he focused on its balance and “rocker.”

“An axe with perfect rocker is one of the best handling axes you can handle,” James said. “And I got the rocker perfect on this axe.”

And just what is rocker?

Gibson explains it’s when you take the hatchet and stand it up edge down on a straight surface. As he puts it, the bit’s edge should meet the surface in the “middle of the blade, the cutting edge and its dead center, and the handle [butt] should touch at the same time.”

When he showed a couple of prototypes of the axe to the folks at ESEE at a BLADE Show one year, they decided to add it to their lineup. At the time, ESEE was hearing from its customers that they wanted the company to offer an axe—and Gibson’s hatchet fit the bill.

James designed the handle to have finger grooves and a knob to secure the hand while swinging it. After the axe was made, he learned a hidden feature of his design: it has enough finesse to carve smaller objects. He says he sharpens pencils with it and once cleaned a trout with it. The result “is capable of doing some real work as well. It also has exceptional balance and you can choke up on it and use it like a knife for many applications,” explains Shane Adams, ESEE’s marketing director.

Of course, it being ESEE, the hatchet comes in the company’s oft-used blade material: 1095 carbon steel. “It’s us,” Adams said. “We know 1095 well.” It’s a steel that handles all the variables of the outdoors. “You can sharpen it with a rock if need be,” the marketing director advises. “Stones or systems, it doesn’t matter. I always like to finish on a loaded leather strop when possible.”

Charles Allen, president and owner of Knives of Alaska (KOA), knows the importance of being prepared. The Alaskan master big-game guide who has flown in the Alaskan skies professionally for almost three decades, always keeps a hatchet stashed in his bush plane—and for good reason.

“When you look back at the old photos of the early trappers and hunters, you will see three things: a rifle, a knife, and a hatchet or tomahawk on their belts,” he said. “Hatchets are still one of the most useful tools a real outdoorsman can have in the field, and they can save your life by enabling you to quickly make a warming fire or emergency shelter.” When consumers demanded a multi-purpose hatchet, Allen studied the designs carried by the folks who make preparedness their motto: the Boy Scouts. “I looked at the historic Boy Scout’s hatchet I grew up with and know that it is a proven design that is hard to improve on,” he says.

But improve on the Boy Scout model he did with the KOA Hunter’s Hatchet. The hickory handle remains tough yet easy on the hands. Heat-treated properly, the S7 tool steel is designed to absorb the shocks of hard blows. With a Rockwell hardness of 50-54 HRC, the edge of the Hunter’s Hatchet is intended to dent if it collides with something hard, Allen says, such as bone while butchering game. And the head can be returned to a razor-sharp bite with Allen’s recommended sharpening tool: a flat, fine-toothed file.

When designing the Hunter’s Hatchet, Allen was sure to include a wide-enough poll so that users could pound stakes, nails and the like with it, too.

David Bloch, president and founder of Outdoor Edge, wanted a hatchet that could out-cut its class: Something small enough to carry easily but with enough heft to take down a medium-sized tree.

“I looked at and tested a number of compact hatchets on the market and came to the conclusion that most full-size hatchets were too large and heavy to take on outings where weight and volume were limiting factors,” Bloch said. “I also found that most every compact hatchet I tested, while cute in appearance, was not an effective chopping tool.”

During outdoor treks when the quality of your tools will make or break the
trip, the Outdoor Edge WoodDevil may be a guardian angel, made possible by the marriage of a combination of the right balance, a good handle and a wide cutting head.

“The WoodDevil stands up to its name,” David said. “With a 4-inch cutting surface, it has the ability to cut through large diameter material with the respect of its compact size.” Plus, its compact size makes it unobtrusive in the camping bin or pickup truck until needed for whatever task—from hammering tent stakes to “slicing tinder shavings,” he adds.

The 3Cr13 stainless steel in a Rockwell hardness of 52-54 HRC is malleable and resharpens easily, and the black oxide finish allows it to better resist corrosion. The TPR rubber handle provides a non-slip grip that soaks up the shock and vibration during use. It’s packaged in a nylon sheath retained with a fabric fastener that can hang from a belt.

As Blake Pogue, product manager of CAS Iberia, tells it, the creation of the Double Mukk started with some pencil, plenty of erasing, and an idea.

“We wanted to bring a full-tang hatchet to market with some unique features at a good price point,” he said. Double-bit axes don’t seem as common as they used to be, but the Double Mukk’s design is grounded in some very real field experience. In fact, it is a design championed by George Sears, the famed outdoor writer with the nom de plume of Nessmuk. 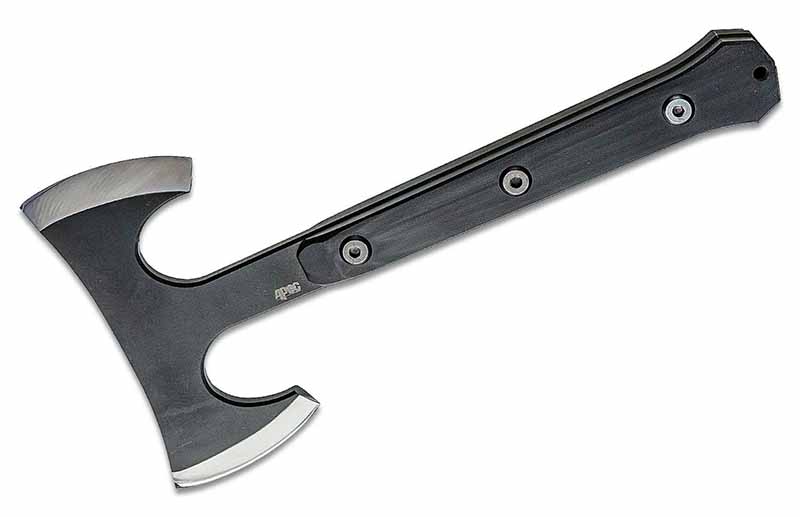 “George Sears was an avid outdoorsman, canoe enthusiast, writer, and conservationist in the late 1800s,” Blake said. “He famously employed a trio of tools for woodcraft —a small folding knife, a thin-bladed belt knife and a short, double-bit hatchet.”

Pogue said after some field testing of their own, the makers learned they didn’t need to tweak much from Nessmuk’s favorite design. APOC Survival Tools makes the hatchet at a forge in Dalian, China, and it’s distributed by CAS Iberia. The blade is 9260 carbon steel, the same material used for swords, among others.

The double edge grants the hatchet additional versatility, as one side is flat ground for delicate carving tasks. The other side is convex ground to better slam through tough cutting jobs. Pogue recommends sharpening a hatchet with a hockey-puck-style sharpener designed for axes because it can easily follow the tool’s convex edges.

“I wanted one tool that could readily build a shelter, prep a fire for a meal, and do the intricate work required to make traps like the figure four,” he said. “If we can accomplish those three requirements, there isn’t much else you’d need but a small knife for food prep, and even then the carving side of the Double Mukk is no slouch!”

While the same in name, the throwing hatchet is different from a traditional outdoors hacker. As axe throwing has become more popular across America, there has been a growing interest in throwing hatchets and finding the best ones to use while competing.

These are three of the more unique options available today for both the novice thrower and the seasoned veteran.

SOG Knives makes great knives, and their tomahawks are the same. The Fasthawk is light and nimble, but still brings power. Made of polished 420 stainless steel, the Fasthawk is a great multipurpose tool.

Not only does it nearly meet the standards of the World Axe Throwing League, but this is also a great piece to chop, dig and pry things open. The ballistic polymer handle provides great grip and precision while cutting or throwing. It is not certified by the National Axe Throwing Federation because they only allow axes with wooden handles.

The nylon sheath can attach to your gear or your belt for portability if you take it outdoors. As a throwing axe it may be a little light for a beginner, at just 19 ounces, but otherwise, it is a fun, durable axe for the reasonable MSRP of $43.99.

Hults Bruk, a Swedish company, forged axes and hatchets of all kinds for more than three centuries. The Motala is still made in the same forge the company first used in 1697, and you can see the history and crasftsmanship in the blade.

The Motala is 4.625 pounds and made of Swedish axe steel, tempered to hold an extremely sharp edge. It has a hand-finished blackened look to it and an American Hickory handle protected with linseed oil. The handle is 30 inches long so you can get great leverage and velocity while throwing.

It is an excellent all-rounder axe but is mainly used for throwing today and could also be hung on your wall as an art piece. It is pricey with an MSRP of $459 but worth it if you’re a professional axe thrower or simply desire a beautiful hatchet.

Made to the regulations of the NATF and the World Axe Throwing League, the Plumb Half Hatchet is almost a perfect throwing axe. It was originally designed for use by roofers and other tradespeople, but throwers have adopted it because of its balance, weight, and durability.

Made of a tempered steel alloy with a hickory handle, the Half Hatchet comes in a bright red color so you won’t be able to miss it as it flies through the air. At 30 ounces in weight, it’s light enough for the family to use for some backyard fun at a barbecue but robust enough to handle the abuse of regular competition.