We are just back from the world’s premier cutlery event — the BLADE Show in Atlanta, Georgia. What a show!

This year marks a new chapter in the history of Carter Cutlery as we moved from a cramped 6-foot show table to a large booth with five tables and room to spare. Our new company logo banner TanSouNin hung proudly on the wall behind to announce our location, and this year all the our staff were wearing new logo T-shirts making us readily identifiable.

Of course, the hanging neck knives were quite distinctive, too. 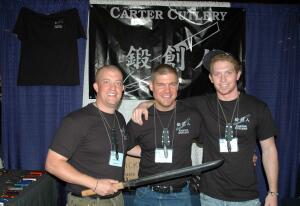 Murray was once again a guest demonstrator/lecturer at the show and successfully shaved volunteer Troy von Kutzleben’s head with a koshinata in front of a crowd to raise awareness for a special disease called Alopecia Areata. We’ll be posting a YouTube video on that soon. Be sure to subscribe to our YouTube channel so you’ll know when that clip has been uploaded. Immediately following that demo, Murray rushed to another room where they were waiting for him so that they could get an informal kitchen knife cutting competition underway. Murray, equipped with a 9-sun SFGZ Funayuki, diced and sliced his way to a decisive victory over competitors from Buck Knives, Boker and Benchmade knives.

While the knife was easily up to the task, Murray, who almost never cooks, is not resting easy on this victory and has resolved to spend some time with a kitchen knife in his hand to practice up for next years official version of this competition.

We were honored to have a special visit from Tim McCalla and his dad. Many of you might remember that Tim worked in our office and sales department before Wes, our current assistant, came on board. Tim is a dear friend and we were happy to visit with him.