James Black’s original blacksmith shop was located on Franklin Street, one block northeast of the town square in Washington, Hempstead County of the Arkansas Territory. According to the author, Black made the Sea of Mud Knife. Click image for a larger view. (relic image courtesy of the Cushing Memorial Library and Archives, Texas A&M University Libraries)

Editor’s note: Read the first part of this series about the “Sea of Mud Knife” here.

“Only Men of Means Could Own One”

To acquire a James Black silver-mounted coffin-handle knife similar to how the Sea of Mud Knife originally appeared, you would have had to visit Black’s shop circa 1830 or so. The price would have been high—more than $20, which would be at least 500 in today’s dollars. Only men of means could own one.

There are indications Black made knives that were less ostentatious for the common man. These were tools and as tools were worn out and discarded. Few have survived.

Black’s shop was located on Franklin Street, one block northeast of the town square in Washington, Hempstead County of the Arkansas Territory. Black had apprenticed for Stephen Henderson in Philadelphia, Pennsylvania, for at least nine years. Henderson learned the art and craft of making Sheffield silver plate in Sheffield, the cutlery center of England.

He could clad silver sheet to the ricasso area of the blade.

Black had set up his blacksmith shop on his town lot in 1829 after he married Anne Shaw. Black had worked in William Shaw’s shop doing general blacksmithing for five to six years. Black made knives of cast steel, the best steel known at the time from Sheffield. He knew how to heat treat to get the best cutting edge. Back then, most crossroads blacksmiths made knives of inferior steel with hardly any heat-treating expertise. Some were even made of wrought iron. Black’s knives became known for their edge holding, craftsmanship and beauty.

A cat keeps vigil on the rock pedestal that marks the original 1829-1832 location of Black’s shop (right). The iron plaque on the pedestal gives one version of how the original bowie knife was made. There are other versions, too.

The frontier town of Washington is located on a sand hill in southwest Arkansas on the Southwest Trail. The Southwest Trail, or the Military Road, led from St. Louis, Missouri, diagonally across Arkansas through Washington to Fulton on the Red River. It was only 12 miles from Washington to Fulton. Across the Red River is Texas. In Texas, Trammel’s Trace led to Nacogdoches and to El Camino Royal—and to San Antonio de Bexar and the Alamo.

The Southwest Trail was the major land route from the Northern United States to Texas. You left Washington, D.C., by the National Road to Parkersburg, West Virginia, and boarded a steamboat to the Falls of the Ohio River at Louisville, Kentucky. You crossed the river to New Albany, Indiana, and took a stagecoach to East St. Louis, and crossed the Mississippi River to the Southwest Trail. You could also go by steamboat down the Mississippi River and up the Arkansas River to Little Rock and down the Southwest Trail.

Three other roads intersected at Washington. The road due west led to Fort Towson in the Indian Territory above the Red River and the ferry crossing into Jonesboro, Texas. A road led due east past Nick Trammel’s Tavern through Camden to Gaines Landing on the Mississippi River in Chicot County, Arkansas. Trammel’s Trace, the route in Texas to Nacogdoches, originated at Trammel’s Place and crossed the Red River at Dooley’s Ferry below Fulton. The other trail led south to Natchitoches, Louisiana, and to Texas.

From 1832 to 1834 most of the Choctaw Nation was removed from Mississippi and Alabama down the Southwest Trail from Little Rock, or from Gaines Landing across the Mississippi River from the Choctaw Trail, which intersected the Natchez Trace in Mississippi. From Washington they proceeded down the Fort Towson Road to Doaksville, Oklahoma, one mile west of Fort Towson.

Two struggling young lawyers from Logan County Kentucky who died at the Alamo, Daniel William Cloud, 21, and Peter James Bailey III, 26, passed by Black’s Shop in the fall of 1835 on their way to Texas. Could they have bought the Sea of Mud knife from Black? They had headed to Illinois where they heard there were more clients.

However, they found the weather too cold, the fees too low, and the “Yankee Lawyers” too active. They went down the Southwest Trail in Missouri and found the same thing. So they went further south through Arkansas to the Red River. From there they took the road to Natchitoches, Louisiana.

The sign outside the recreation of James Black’s blacksmith shop carries the year 1961. According to at least one other source, the recreation was built in 1960.

On Dec. 29, 1835, near Natchitoches, Cloud wrote his brother a letter describing his trip to Texas:

“We found Arkansas Territory in some places rich, well watered and healthy and society tolerably good, but the great body of the country is stony, sandy, and mountainous, in passing through, we traveled ten days constantly in crossing the mountains.

“On Red River the lands were immensely rich, and planters also, many of them worth two and three hundred thousand dollars. Had we chosen to locate in Arkansas, we could have made money rapidly if blessed with health and life; dockets and fees being large.

“The reason for our pushing still further on must now be told, and as it is a master one, it will suffice without the mention of any other one. Ever since Texas has unfurled the Banner of Freedom, and commenced warfare of liberty or death, our hearts have been enlisted in her behalf. The progress of her cause has increased the ardor of our feeling until we have resolved to embark in the vessel which contains the Flag of Liberty and sink or swim in its defense.”

An Englishman, George William Featherstonhaugh (pronounced “Fenshawe”) came down the Southwest Trail through Washington in late November or early December 1834.

He writes in his journal, Excursions Through the Slave States of North America:

“And we made an agreeable excursion in the neighborhood, calling for a short time at the little insignificant wooden village of Washington, where the government land sales were holding.

“I was not desirous of remaining long at this place. General Houston was here, leading a mysterious sort of life, shut up in a small tavern, seeing nobody by day and sitting up all night … There were many persons at this time in the village from the states lying adjacent to the Mississippi, under the pretense of purchasing government land, but whose real object was to encourage the settlers in Texas to throw off their allegiance to the Mexican government.”

Sam Houston was back from his peacemaking journey among the Texas Indians. He was staying at Elijah Stuart’s Tavern that was next to Black’s shop on one side and the town square on the other.

“It was a charming sunny day, the thermometer (Dec 11) stood at 74 degrees out of doors, and not a cloud in the sky,” Featherstonhaugh wrote.

The Englishman crossed the Red River at Dooley’s Ferry into what the ferryman called “Spain.” After three or four miles, Featherstonhaugh came upon a dry and black land called Lost Prairie, “a tract of about 2,000 acres of incredible beauty and fertility, bearing extraordinary crops of cotton, and gracefully surrounded by picturesque woods.”

After James Black (believed to be at left in the above vintage daguerreotype) lost his eyesight, Dr. Isaac Newton Jones tried to restore it circa 1840. Around the same time, Black went to live with Judge Jacob Buzzard (believed to be at right) on Buzzard Bluff southeast of Dr. Jones’ plantation.

He rode to Dr. Isaac Newton Jones’ plantation and spent the night. After a short stay exploring this area of Texas, Featherstonhaugh returned to Little Rock upon his steed, Missouri, loaded down with bundles of Texas treasures. He then went to New Orleans by steamboat.

The Jones plantation is located about 3.5 miles south of Fulton in Miller County, Arkansas. In 1835, Lost Prairie was in the Texas province of Mexico but was also claimed as part of the Arkansas Territory. Arkansas Gov. Daniel Webster Jones was born on the plantation on Dec. 15, 1839.
Southeast of the Jones plantation is Buzzard Bluff, home of Judge Jacob Buzzard. In about 1840 after James Black had lost his eyesight, Black lived with Jacob Buzzard on Buzzard Bluff. Buzzard died in 1842.

Meanwhile, try as he might, Dr. Isaac Newton Jones could not restore Black’s eyesight. However, he took Black into his home and cared for him.

After Jones died in 1858, his wife and the Jones’s son, Daniel Webster Jones, cared for Black until Black’s death in 1872. Daniel penned the definitive story of Black’s life in 1902. In that story he wrote: “About 1833 or 1834, perhaps earlier, James Bowie came to Washington and gave Black an order for a knife …” 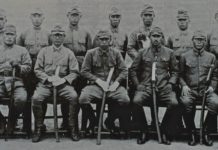