After years of being as mythical as its title character, the fifth movie in the Rambo franchise, Rambo V, is slated for a fall 2019 release, according to Deadline:

In the fifth episode of the franchise, when the daughter of one of his friends is kidnapped, Rambo, who has been working on a ranch, crosses the U.S.-Mexican border and quickly finds himself up against the full might of one of Mexico’s most violent cartels.

… Something wicked is coming this way!

That’s if it releases. The only proof of life is the movie poster and some press. Stallone was non-committal when BLADE pressed him about it last year, saying only, “Never say never” (read the full interview here).

Don’t know if this is true about a fifth RAMBO film. The author of the source material is always the last one to find out. Every six months there’s an announcement along these lines, but DEADLINE HOLLYWOOD is reputable.https://t.co/Ju58qX8KSU#RamboV @DEADLINE pic.twitter.com/4eC7uOisQ0

Time will tell. That the announcement comes during the Cannes Film Festival could mean this is only a play to see whether investors will bite. A little hype from the fan base, by way of a poster release, couldn’t hurt those prospects.

Who Will Make the Knife?

Cutlery-Hall-of-Fame® member Gil Hibben made the knives for Rambo III and Rambo, but it’s not clear whether he will be back for a third time. Regardless of who makes the knife, it’s encouraging to see the poster feature a blade. Sourcing the knife won’t be an afterthought.

Even if the movie is financed and starts production, it may be a while before the knifemaker is selected. Not only would the commission need to be negotiated, but Stallone himself will have to sign off on the design.

BLADE will report on developments as they occur. Keep an eye on the movie’s IMDB page, too. 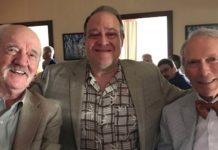