The fact that custom knifemakers adopted the pocket clip, as did factory knife companies everywhere, should come as no surprise. For one thing, the clip’s abilities to attach a closed folding knife to the lip of your pocket rather than having the knife bang around in the bottom of it with car keys, coins, etc., and to make it much easier to retrieve are eminently practical. In addition, Spyderco has offered many factory/custom collaborations—knives designed by custom knifemakers and then reproduced by a company, in this case Spyderco. The first of these was in the early 1990s—the C15 designed by Bob Terzuola, which, of course, also had the blade hole and a pocket clip.

Today’s custom versions of the pocket clip run the gamut, including long ones, short ones, tall ones, round, anodized ones, rose gold ones and more.

On the other end of the scale is Lucas Burnley’s Asian-style folder with a very short skeletonized clip, while Butch Ball offers trailing-point damascus clips on his pearl-handle folders. Craig Camerer presents a long, curved clip in mokuti on his damascus folding knife, while Cutlery Hall-Of-Fame member Ken Onion opts for a short, cross-hatched clip on one style of his folders.

These are but a few of today’s custom knifemakers who took their cue from Sal Glesser and his utilitarian pocket clip. Hey, if you’re going to emulate someone, emulate the best. 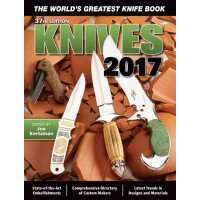 The best knives in the world can only be found in the greatest knife book on the planet. Put your order in for Knives 2017 and look forward to gorgeous full-color photos of custom knives, in-depth articles and profiles of the hottest knives from the best ‘makers.

Order Knives 2017 from ShopBlade.com for the best price anywhere.