When it comes to collecting Rambo movie knives and movie props, Randy Rousseau takes a back seat to no one. A personal acquaintance of Sylvester Stallone’s, Mr. Rousseau has a collection of all things Rambo unlike any other anywhere.

On the 35th anniversary of First Blood, Rambo and Rambo knives in general, he was gracious enough to grant a special BLADE® interview about his collection, Rambo movie knife values, some little known facts about Rambo knives and much more.

BLADE: What are the values of the original versions of each Rambo knife?

RANDY ROUSSEAU: The original First Blood knives serial numbered one through six are “priceless.” They are screen used and iconic, are owned by Stallone and are in his personal collection.

Give values for each knife in mint condition.

The first numbers from the Rambo II: The Mission knife sent to Stallone are iconic and from his personal collection. They are also screen used and are “priceless.” Rambo: First Blood, Part 2 was the highest grossing film in the series, which adds to the value from a film-prop collector’s point of view. The rest of the numbers up to 100 sold to collectors for between $25,000 to $50,000 each, depending on the serial number.

How many of each original version of each custom Rambo knife were made?

According to Jack Lucarelli’s book, James B. Lile: The Arkansas Knifesmith, Knifemaker to the World, 13 were made. That’s correct and matches the correct version used by Stallone in the movie, plus the model marked “1 of 1 RAVEN.”

How many of the original First Blood knives were damaged during the making of the movie?

Only one was damaged in filming and the others did survive. For more information see the video below. The knife in that video sold for $90,000.

How much is one of the first seven First Blood knives worth if in mint condition?

Do all of the original First Blood knives still exist or do you know?

Yes. They are in private collections.

Are the First Blood knives with the Jim Buff aloe sheaths more valuable and if so, how much more?

How much are the unnumbered First Blood custom knives worth in mint condition?

What is one of the first 100 Rambo II: The Mission custom knives worth in mint condition?

How much is one of the 25 Mission custom knives with black blades worth, in mint condition?

How much are each of the unnumbered Mission custom knives worth in mint condition?

How many of the custom Gil Hibben knives actually used in Rambo III were made, and how much is each worth in mint condition?

Six. All are “priceless,” screen used and owned by Stallone, and iconic.

You mentioned something about there being two serial number 19 Rambo knives. Were those Liles and if so, please explain why there are two.

Yes, the Mission knife. The original serial number 19 had some issues and was sent back to Jimmy. Rather than repairing it right away, he made another serial number 19 and sent it to the collector. Years later after Jimmy passed away the original 19 had been repaired and sold. The 19 is rare because it’s the only duplicate number in all of the Rambo saga of knives.

Who has them and what are they worth?

The knife used by Jim Bowie in the Sandbar Fight inspired scores of emulators in both Sheffield, England, and the USA in the 19th century, and the Rambo knife did the same by knifemakers and knife companies worldwide. Is the Rambo knife the modern-day equivalent of Jim Bowie’s knife in terms of popularity?

Yes, 100 percent, due in large part to its being used as a reference in popular culture.

In your opinion, is the Rambo knife less popular than Bowie’s knife, about the same or more so, and why?

More so. The Rambo knife has worldwide appeal. Nothing will ever come close. It was a moment in time, like lightning in a bottle. It made such an impression on the generation and inspired so many to go into the prop business for films and/or the knife-collecting world. I know folks who have a likeness of the Mission knife tattooed on their body.

It really inspired a generation that put serious interest into the knife industry. Never had we seen a character on film use such an elegant knife in this manner. And after all these years, nothing on film comes close to the Rambo knives seen in the four movies.

What do Jim Bowie’s knife and the Rambo knife have in common?

Their impact on culture. Each is famous for its influence on the knife industry and the public.

How are they different?

They are from different times but defined a generation, like Elvis and Michael Jackson did their generations.

How did the Rambo knife change the custom and factory knife industries?

It brought major interest back to the knife-collector side and created an entire industry of replicas for the common fan. I have been told that the Rambo movies saved the knife business, and with the movies still getting major viewers on cable and downloadable services, the interest is still very strong.

Are there any issues or stories concerning the Rambo knives that you know of that have never been addressed or that are rarely addressed that you think need addressing?

Yes, the Rambo III “Rescue” knife that was used on screen in the minefield. It’s a beautiful version that really doesn’t get a lot of interest but is a very cool Rambo knife. It sort of ties the gap between the first two films to the Rambo III main version from a design point of view.

Also, Jimmy Lile made a 1 of 1 for Stallone with his code name RAVEN on a First Blood version and a Rambo II Mission version. Extremely rare, they are the only 1 of 1 Lile Ravens in existence. In keeping with the Raven theme, Gil Hibben was asked to produce the same for the Rambo III knife. It is marked Raven 1 of 1.

And again for the fourth film, the Rambo IV knife was made and marked Raven 1 of 1, making this the only complete 1-of-1 set in the world from all four films. 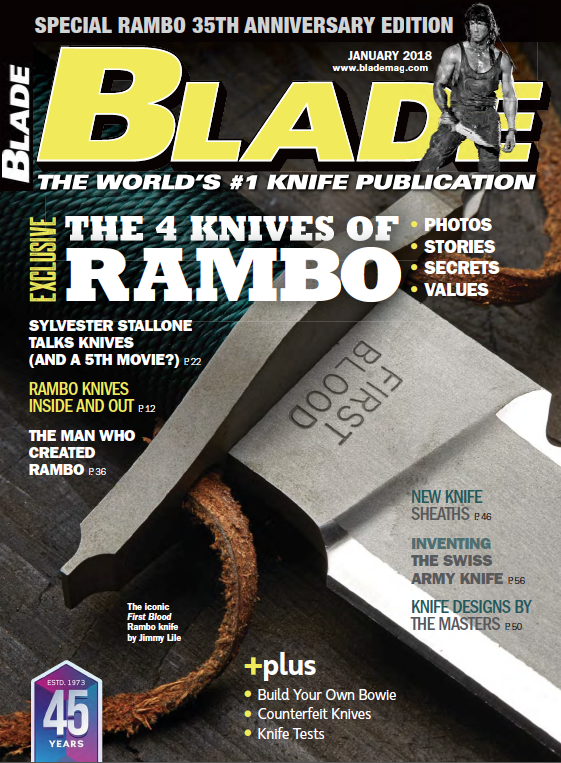