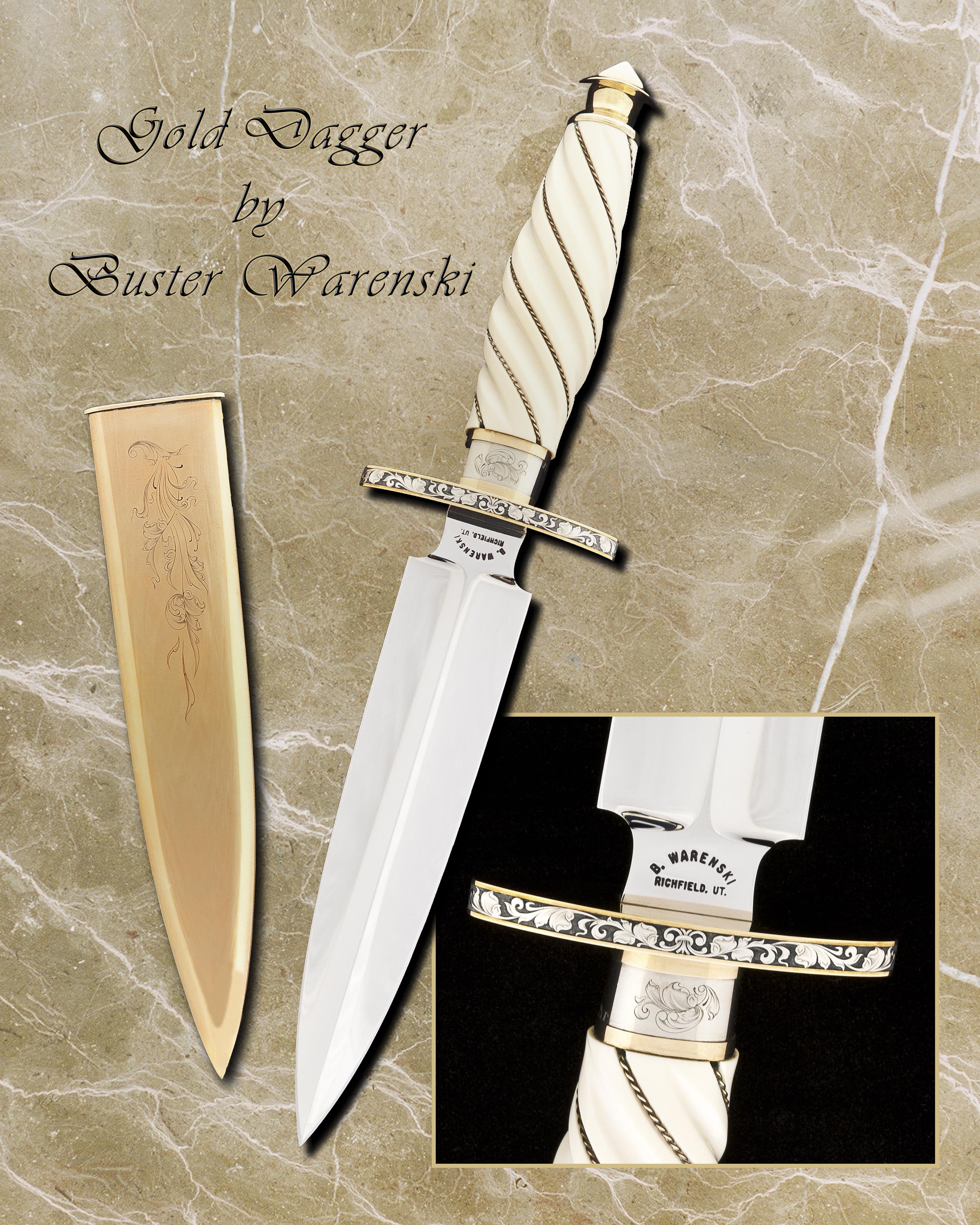 When knife enthusiasts think Knifemakers’ Guild, thoughts of Blade Magazine Cutlery Hall-Of-Fame© member Buster Warenski cannot be far behind. His gold dagger includes a gold separator band between the guard and also a gold pommel. The handle is carved antique ivory with twisted gold wire. The engraving is by Julie Warenski-Erickson. (from the Dave Nittinger collection; photo by Dave Siegel)

From One Cutlery Cradle To Another

ARE YOU UP ON YOUR KNIFE HISTORY, especially the golden age of Sheffield and the beginnings of the Knifemakers’ Guild? Our first installment of a new BLADE® department, the “BLADE Quiz,” should let you know how schooled you are in short order. The answers appear below.

2) Knifemaker Ted Dowell served as a gunnery officer on which U.S. Navy ship during the Korean War? A) U.S.S. Minneapolis; B) U.S.S. Missouri; C) U.S.S. Intrepid

4) Which Guild knifemaker was known early on by the moniker of “El Lobo Solo” (Spanish for “lone wolf”)? A) Chubby Hueske; B) Ruffin Johnson; C) Clay Gault

5) Upon completion of 50 years of service, each Joseph Rodgers & Sons Ltd., employee was presented with: A) A 5-inch-tall silver statue of Vulcan holding the Rodgers trademark of a six-pointed star and a Maltese cross; B) a replica of the world-famous Rodgers “Year Knife”; C) a gold watch

8) In 19th-century Sheffield, the men who worked knife grinders feared: A) grinder’s asthma or grinder’s consumption; B) shattering grindstones, which could kill a worker; C) A and B

9) Who stated, “Is knifemaking an art? I feel that anything done well is an art, be it a Rembrandt, a custom knife, or the Golden Gate Bridge. In short, what is art? More important, what isn’t?” A) Bud Cronk; B) Buster Warenski; C) Harvey McBurnette

11) According to The Knifemakers Guild Directory of the Membership, Bob Dozier is the son of: A) a blacksmith; B) an ironworker; C) a farrier

12) The tool used by many Sheffield cutlers to put inlay holes in mother-of-pearl scales or to drill holes in scales is known as the: A) stidder or stiddy; B) parser or parsey; C) doller or dollie

13) The first female knifemaker to apply for membership in the Knifemakers’ Guild was Carolyn Tinker, at the 1974 Guild Show. However, there was also another female maker who applied for membership at the ’74 show. Her name? A) Mary Jean; B) Ethel Waters; C) Rita Winter

14) The term pocketknife originally referred to: A) a knife with blades opening at one end only; B) any knife that could be carried in a pocket; C) a knife that was always handy and could be used for any number of cutting chores

15) Which of the following is not a founding member of The Knifemakers’ Guild? A) Jon Kirk; B) John Applebaugh; C) John T. Smith

16) In old Sheffield, a bolster was cast or forged from nickel, iron or brass and had a projection used to tommy it to the liner. In this instance, to tommy means: A) to pin; B) to rivet; C) to solder

17) Xylonite was the first of many types of imitation: A) bone; B) ivory; C) pearl

18) Knives with handles made by burning an imitation tortoiseshell pattern into clear horn with lye were known as: A) spotted penknives; B) shell knives; C) turtle blades

19) The Deguello, the tune Santa Anna adopted to signify no quarter would be given to the defenders of the Alamo, was originally used by: A) the Moorish invaders of Spain; B) Christopher Columbus; C) the Spanish conquistadores

For more on the latest knives, knife legislation, knifemaking instruction, knife trends, knifemakers, what knives to buy and where and much more, subscribe to BLADE Magazine, the World’s No. 1 Knife Publication. For subscription information click on http://www.shopblade.com/product/blade-magazine-one-year-subscripti…?r+ssfb050512#BL1SU.