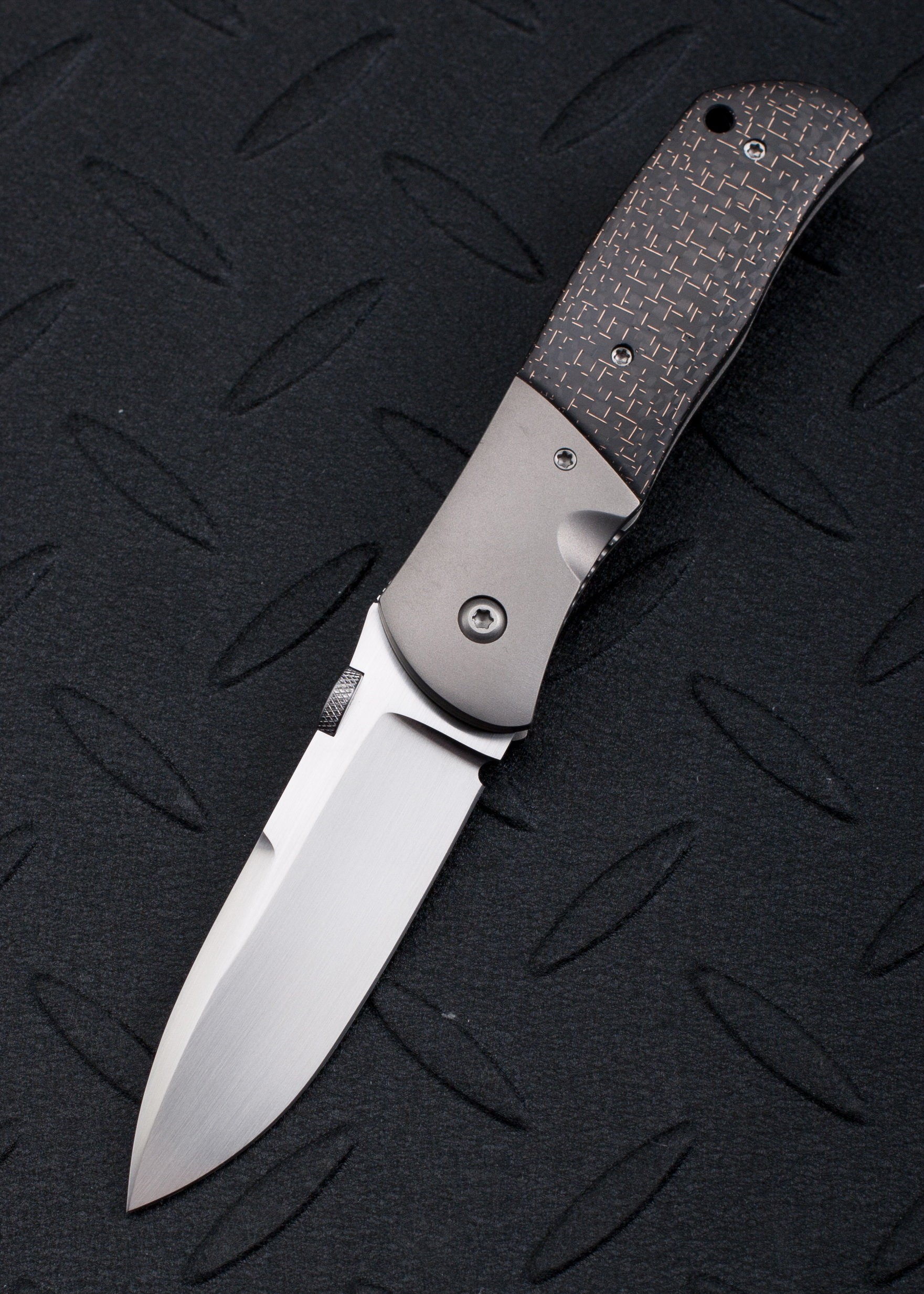 Custom knife purveyor Les Robertson hot listed the SD-2 by John W. Smith with a titanium bolster and lightning-strike handle at $550. Smith’s list price for his SD-2 with a 3-inch blade of CPM-S35VN stainless and a lightning-strike carbon-fiber handle (above): $495. (photo by Chris Smith)

As new knifemakers enter the arena and the competition raises the bar for all concerned, trends in custom tactical folders point to more choices for you.

“The tactical folder market is without a doubt the fastest-moving, innovative sector of the custom knife market. The days of [dated blade-opening features] are rapidly coming to an end, for example,” purveyor Les Robertson opined. “Continued use of [such features] is telling potential collectors that the maker either can’t do some other kind of opener, or the maker chooses not to. Either way, collectors are moving past that. In components, most makers are moving at least to the IKBS [Ikoma Korth Bearing System], while others are using more advanced roller bearings. The days of washers being used [for the blade pivot] are also coming to a close.”

In blade steels, Robertson talked of the rise of CPM-S35VN, CTS-XHP and Bohler Uddeholm N690. Meanwhile, blade lengths may be trending back toward a smaller average length at 3.5 inches in response to collector demand for something a bit different after several years of buying blades of 4.5 inches or more. Possibly three or four years from now, he said, buyers may reverse themselves again and seek longer blades. Dedicated tactical folder buyers are also looking for flipper opening systems, and makers are responding there as well. Moreover, lightning-strike carbon-fiber handles continue to boom.

“David’s knives are well designed with top-of-the-line fit and finish,” Stark remarked. “The grinds on the Persian really make it stand out. It rides well in the pocket for a large knife. Recently, David teamed up with knife designer Tashi Bharucha on a knife called the Freak. That knife is smoking hot and never lasts long on our site.”

Robertson hot listed the Dustin Turpin War Chief at $450 with a titanium bolster and carbon-fiber handle, John W. Smith’s SD-2 with a titanium bolster and lightning-strike handle at $550, and the Q36 from R.J. Martin with titanium bolsters and lightning-strike scales at $675. The Sniper Bladeworks LPC in a titanium frame is hot at $575, while the Cruze by Dave Curtiss is going fast at $575 in a titanium handle, and the Azrael from Will Zermeno with lightning-strike scales is selling well for $340. Frank Fischer’s Commander, Larry Chew’s Cujo, and Les George’s Hydra R each sport titanium frames or bolsters and are going fast at $625, $550 and $525, respectively. Other makers high on Robertson’s list include such perennials as Blade Magazine Cutlery Hall-Of-Fame© member Ken Onion, Ernest Emerson, Pete Carey, Tim Galyean, Scott Cook, Rick Hinderer and Michael Burch.

“Tom’s knives are in great demand,” Stark offered. “His grinds are incredible and his fit and finish are superior. I would say Tom makes the best framelock out there and sets the bar for fit and finish. Tom has incorporated the IKBS into his flippers, which makes them smooth and quick.”

Both Neil Ostroff of True North Knives and Weikum lauded the recent contributions of Marisa Strider, wife of Mick Strider, whose popular knives include the custom PT with a blade just under 3 inches and the SJ75 Baby Hughie. Marisa and Mick make both models, which range from $800 to more than $1,000 depending on materials, with a popular variant sporting a damascus blade.

Ostroff and Stark said new models from Bob Terzuola are taking off. These include the Athena and Eagle Rock in large models, while the ATCF remains one of Terzuola’s best sellers due in part to its triple-ground blade of satin-finished CPM-154, cermat bolsters and carbon-fiber scales with red liners. (Editor’s note: According to Ostroff, cermat is a pure acrylic similar to Corian used for workbench surfaces.)

“The ATCF really identifies Bob as the godfather of the tactical folder,” Ostroff said. “An interesting note is that over the last few years, Bob has started to produce one-of-a-kind knives only to be sold off his table at shows. As one who has been his next-door table mate many times, I can attest to the fact that they’re all snapped up within a few minutes of the show opening.”

Stark praised the ATCF and its maker. “Bob’s folders are legendary. His designs are timeless and very much in demand. The ATCF and Eagle Rock are what many tactical knives are patterned after,” he observed.

According to Ostroff, the Kirby Lambert SNAP folder is another fast mover, featuring the IKBS bearing system and the “screaming sharp” blades for which Lambert is known. Stark called Lambert’s SNAP flipper with an S30V blade, lightning-strike carbon-fiber bolsters and a carbon fiber handle one of Kirby’s designs with “very natural flow, blending ergonomics and functionality.” Starting at $575, the SNAP is available in a variety of materials, and the ORION, a non-flipper version of the same knife, is popular as well. Ostroff also noted significant movement in the tactical folders of Brian Fellhoelter with blades from under 3 to well over 5 inches. The dress tactical folders of Gustavo T. Cecchini have stirred up a “feeding frenzy” at $1,000 to $2,000, Ostroff added.

Stark singled out the Torrent flipper from D.B. Fraley with a hand-rubbed satin-finish CPM-154 blade and titanium body at $650; the J.L. Williams Shoreline Flipper with damascus blade and titanium scales at $1,200; the Gerry McGinnis Apex flipper at $675; Randy Doucette’s Armour flipper at $650; the Ground Fighter and new Chainsaw model from Greg Lightfoot at $550 and $600; Jens Anso’s Mofo with RWL-34 blade steel and G10 scales at $775; and the Jekyll and Hyde from Allen Elishewitz at $800.

“Greg Lightfoot is constantly changing things up,” Stark observed. “He has recently started to bring back his old-school tactical designs with a new twist such as his Talon Tip. Allen Elishewitz continues to morph from design to design, really keeping his finger on the collector’s pulse. Allen does his knives in a standard tactical model and a full-dress model using high-end materials.”

For more on the latest knives, knife legislation, knifemaking instruction, knife trends, knifemakers, what knives to buy and where and much more, subscribe to BLADE® Magazine, the World’s No. 1 Knife Publication. For subscription information click on http://www.shopblade.com/product/blade-magazine-one-year-subscripti…?r+ssfb022512#BL1SU