Ka-Bar Makes One Of The Most Legendary American Combat/Utility Knives. First Issued In 1942, The Knife Continues To Impress And Inspire Today.

Few knives are as beloved and inspire more contemporary blades, than the Ka-Bar USMC fighting/utility knife. Ka-Bar Knives’ designation for it is the 1219C2, aka “the Ka-Bar,” and the knife was, and still is, a high-quality combat/utility tool. Ka-Bar Knives makes the contemporary version in its factory in upstate New York.

The History Of The Ka-Bar

As America entered World War 2, the Army and Marines took issue with the old World War 1-era trench knives that were being issued to them. The handles were too bulky, the blades were too brittle, and they were expensive to make.

After trying a few stopgaps, the Army asked arms suppliers to design a new combat/utility knife. Marine officers John Davis and Howard E. America worked with the Union Cutlery Company (now Ka-Bar Knives) to design a model that took elements from an old Navy knife and civilian hunting knives to create the 1219C2. In addition to Ka-Bar, Camillus, PAL, Robeson Shuredge, Case and Ontario were among those who made a USMC fighting/utility knife or a reasonable facsimile.

The knife was first issued to elite Marine units in November, 1942 and became standard issue for all Marines by 1944. Today, the knife is manufactured for military use and marketed to civilians as a utility/hunting knife.

Along with the original USMC fighting/utility knife, Ka-Bar makes many different combat/utility knives. This trio is a prime example of what the company produces today.

The knife that made the Ka-Bar name famous is as popular as ever. There’s also a serrated version, but the plain edge is the original and is a hefty, economical knife.

The 7-inch clip point blade is made from 1095 Cro-Van steel with a 20-degree flat grind and a Rockwell hardness of 56-58 HRC. At just 11.2 ounces, it’s lighter than you might expect from a knife that size, which lets it flow smoothly when slicing, and the leather handle provides a secure grip. The rigid plastic sheath is MOLLE-compatible and can be carried vertically or horizontally.

Classics are classic for a reason, and the USMC fighting/utility knife is everything you could ask from a combat/using piece.

Melding an American bowie-style blade with Becker’s trademark ergonomic handle design and you get this sleek, all-black combat knife. It is designed for bushcraft or camping too.

The 9.25-inch blade is married to an Ultramid handle that provides a strong grip. At 17.12 ounces, it’s a bit heftier than the USMC fighting/utility, making it excellent for more heavy-duty work like trimming thicker branches and vines or cutting through medium brush. Similar to the USMC fighting/utility, the Combat Bowie is made from 1095 Cro-Van and has a Rockwell hardness of 56-58 HRC.

A heavy-duty polyester sheath is included and is MOLLE-compatible as well.

This knife may have “combat” in the name, but its bread and butter is decimating small trees and vines. The kukri is smaller than a standard machete and is more finite in its cutting. That doesn’t mean that this blade can’t flex its muscle and chew through almost any brush you put in front of it.

At just under 16 ounces, it’s relatively lightweight yet robust.

If you’re buying it you’re most likely looking for a high-quality outdoors knife, and this kukri is it. The 1095 Cro-Van will need to be maintained to get the best out of it over time, but that comes with the territory of owning good knives. This knife will make a great companion working through the bush while camping or while cutting through bushes in the backyard. 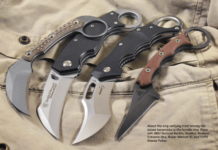 4 New Karambits That Are Very Different

Design and Make a Combat Knife