BLADE Magazine Cutlery Hall-Of-Fame® member Pete Gerber knew he was onto something with the FS1, a knife he remembers as “dandy” and one of three in the Folding Sportsman line that debuted with Gerber Legendary Blades beginning sometime around 1980.

“It was just a little heavy,” Pete recalled. “Blackie Collins was working with us on some projects then, and I asked him for help with it. I said, ‘Blackie, this is a nice knife. How can we take some weight out of it and put some pizzazz into it?’”

The knife engineers at Gerber Legendary Blades had been working with Micarta handle slabs, rather labor intensive at the time since the plastic laminate had to be machined to the appropriate shape.

“We had to mill it out and used brass washers with rivets to attach the slabs,” Pete said. “The original LST was the FS1 in-house design, and Blackie was first given the assignment to put moxie into it using the existing parts. He worked on the design and then put an injection-molded handle on it with nice checkering. Those were his contributions.”

As fine as it was, as long as the slab handles were involved the LST had trouble fully living up to the attributes that provided its name, “Light, Smooth, and Tough.” Collins already had contributed some well-known designs to Gerber, including the Bolt Action folder and the Touché belt buckle knife, and the wheels began to turn in his head.

Blackie had a friend in Gastonia, North Carolina, just outside Charlotte, and that friend ran an injection-molding business. Instead of using riveted slabs as handle material, why not try a one-piece injection-molded handle to reduce both the weight and production cost of a knife design that was already selling pretty well? Just to add to the incentive, injection molding would open up the spectrum of handle colors as well.

After some experimentation, the production LST was manufactured with the glass-filled, nylon-reinforced Zytel as the handle material.

“It was the first time a folding knife was made with a one-piece handle, and it worked,” Pete remembered. “The action was so smooth because we went through an operation called ‘match catch,’ where the blade and the catch were kept together until they were assembled and until they were just perfect. When the knife closed, the blade referenced the catch, and it was as smooth as it could be.”

A New Car for a New Knife

Almost as sweet as the story behind the LST, which has sold in the millions since the early 1980s, is the back-story of Blackie’s compensation for his input that led to the dynamic little knife’s eventual success. Pete asked Blackie what he wanted in the way of payment for services rendered.

“I didn’t think it could be a royalty knife since it was a modified in-house design,” Gerber explained. “I asked what he wanted for payment, and I suggested that maybe a new car would be something he would like.”

The story goes that the new car turned out to be a Corvette and that Pete’s check for $29,000 made it happen.

Blackie, a Cutlery Hall Of Famer who tragically lost his life in a motorcycle accident in 2011, loved cars and motorcycles and just about anything mechanical, and the idea of new wheels appealed to him. His wife, Jane, remembers well the search for just the right vehicle.

“We went from South Carolina to Jacksonville, Florida, to look at Avanti cars,” she recalled. “He didn’t like the way the new ones handled, so we looked at Corvettes, bought one that was two-tone gold, and drove it home. He owned that car for a few years and then traded it in.”

Pete remembers Collins driving around his hometown in South Carolina in that Corvette with a license plate that simply read, “Blackie.”

Offering items other than money for consulting seemed to work well for Pete, who also once paid Cutlery Hall-Of-Famer Bob Loveless with an airplane.

While Blackie burned up the roads in the Corvette, the Gerber-Collins partnership took the knife market by storm with the LST.

“Blackie used to say that the LST revolutionized the knife industry,” Jane recalled. “He did a lot of work for Gerber, and he really reduced the number of parts on that knife and put the plastic handle on it to make it lighter.”

Taking the World By Storm

The new lightweight knife was a sensation, and soon other knife companies were taking notice, working on something similar. It was pure gold in itself—with a grand total of six parts to the whole enterprise. Buyers wanted the light, smooth-action, durable and reasonably priced LST, and competitors scrambled to keep pace with Gerber’s trendsetter.

Soon enough, there were similar offerings rolling off assembly lines and onto store shelves. The introduction of LST energized knife manufacturers in a manner seldom seen.

The LST developed its own legacy among the knives that changed knife history, and it is still being manufactured in Portland, Oregon, and sold under the Gerber banner today.

“It was the first true ultralight knife,” explained Dan Delavan of Plaza Cutlery in Costa Mesa, California, “and Gerber had a high-quality blade in that light handle at a good price. You could throw it in the pocket of your swim trunks and go! Lightweight became attractive, and the LST was thin, too. It didn’t bulge in a suit pocket and the checkering gave it a nice grip, just like an extension of the finger. It was the knife that introduced the ultralight, and we sold a lot of them back in the day.”

Contemporary to the introduction of the LST, Cutlery Hall-Of-Famer A.G. Russell was producing ultralight knives of his own in the Airweight series. Like other knife manufacturers and designers, Russell also worked with Blackie.

He remembers the concept of the ultralight as the shape of things to come in the 1970s.

“I wanted strength but little weight in a knife, too,” Russell noted, “and my Airweight was using a Micarta handle. Blackie had that great idea of molding the handle instead of shaping it, which would have suited an operation like Gerber perfectly. The LST was extremely lightweight and it sold in the millions.”

Pete Gerber recalls using 440A stainless blade steel in the early LST, and says the knife had a good, husky blade that he never saw break—and it was complemented with a nicely polished tang.

“Many other companies were copying it, trying to figure out what we did and how the LST worked so well,” Pete said. “Many of those companies made knives that were quite similar to the LST long after ours was successful. I don’t believe we had a patent on it at all; I don’t think we could get one. The patent area was out of my expertise, but I told our folks to get one whenever we could.”

After almost 40 years, the staying power of the LST is undisputed, and its place as a milestone in the progressive development of knife design is secure. Along with other innovations attributed to Blackie, it stands out among its peers with a timeless depiction of design sense and simple user friendliness.

During the past four decades, the LST has been manufactured in several variants.

DuPont recently celebrated the 50th anniversary of its nylon plastic with a commemorative run of LSTs handled in the company’s Delrin material.

Not long ago, Pete was in a company store in Lincoln City, Oregon, and one of the clerks showed him a Mini LST with a bright green handle.

“I had never seen that bright green before,” Gerber laughed. “It just goes to show you that things can develop that you don’t even know about.”

When the LST hit the market in 1981, the time was right. Since then, it has given Gerber and the knife industry a continuing boost.

“It has sold in the seven figures,” Pete reflected, “and I think it gave us a hell of a shot in the arm.”

The standard LST sells today on the Gerber company website for a modest $23. The knife weighs a remarkable 1.2 ounces with a drop-point 420HC stainless steel blade of 2.63 inches and a closed length of 3.61 inches. The handle is described as tactile, textured and made of lightweight, synthetic glass-filled nylon.

Light, smooth, and tough, Gerber’s LST has earned its place among the elite products of the modern knife industry.

What Other Knives Changed the World? Find Out With This Download 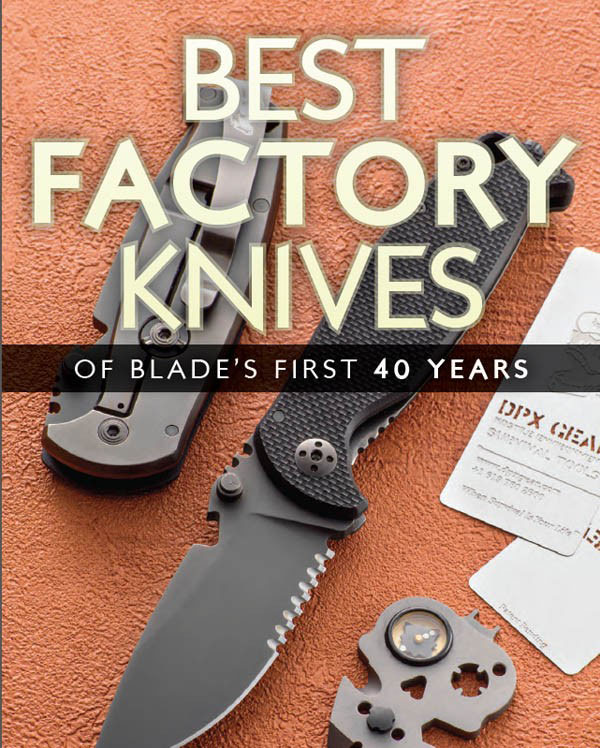