Editor’s note: All images are courtesy of their respective manufacturers.

Today’s sporting cutlery market is flooded with some very good foreign-made knives, and it may seem USA-made models are threatened in terms of quality, but nothing could be further from the truth. The American knife industry is still the leader of the pack.

USA all the Way, Even When It Gets Tough

Emerson Knives, Inc., and president/founder/custom knifemaker Ernest Emerson are unabashedly pro-American made. Emerson founded the company in 1997 on the principle of designing and building the best USA-made production tactical knives anywhere.

Along with his wife Mary, Ernest has consistently grown the company by listening to what consumers want. Emerson knives are 100 percent made in the USA, right down to the screws. Emerson is an ardent supporter of the military, law enforcement and other first responders, another good reason why it’s so important that the company’s knives be made entirely in the USA.

Nonetheless, there are downsides.

“There are very few advantages in building a manufacturing operation in America,” Emerson says, citing state and federal taxes and ever-increasing regulations. It’s actually tough for a business to remain competitive here. However, I believe it’s worth the effort, restrictions and extra burden because I will do anything for America. I know my business is putting Americans to work with American wages who can earn a living in this country.”

He adds that the taxes he and his employees pay go directly to supporting the country and the U.S. military and its infrastructure.

“We have to manage our business smarter, more efficiently and more strategically to ensure a profitable and viable existence,” he stresses.

It’s the same attitude that makes the Commander and CQC7 models the company’s best sellers. The CQC7 is durable and comes in three sizes and two distinct blade shapes. A sexy piece with its ergonomic handle paired with a recurved clip-point blade, the Commander is a formidable cutting tool that comes in five iterations, each varying in size. Maintaining the popularity of these knives down the road is important to Emerson.

â”In order to stay viable,” he notes, “I believe the future lies in the industry’s ability to design and build knives that the consumer really wants.”

CJ Buck, president of Buck Knives, says a major advantage to having knives made in the USA is owning the integrity of the manufacturing processes.

Another advantage is heightened flexibility and responsiveness.

“We can fix a design or quality issue quickly or adjust to spikes in our forecast since the partnerships between our factory and our USA vendors can be aligned immediately,” he explains.

On the other hand, domestic production carries its own set of challenges.

“When importing, if you need to add capacity you simply contract with another factory or, on the other side, cut a factory off,” he explains. Stateside you have to invest in more equipment, people and buildings. Consequently, as Buck laments, “If you are forced to reduce your output, the pain and loss of investment is in laying workers off.”

As for the future of American knife manufacturing, Buck is optimistic.

“The United States continues to lead in innovation,” he states. “Our culture and national character give us a substantial, sustainable advantage in that area.”

“Made in the USA” Means Better Quality Control

Microtech Knives built a solid reputation in the 1990s on designing and making some of the market’s most progressive production tactical folders, and continues to push the envelope. Why manufacture in the USA?

“So we are able to keep flaws to a minimum and catch mistakes early on,” reasons Hank Greenberg, the company’s custom shop manager, adding that if a company offers a solid made-in-the-USA knife with quality materials, then consumers will have no problem paying a fair price for it.

HTM Knives is based in Forney, Texas. An acronym for Hand Tech Made, HTM was founded by knifemaker Darrel Ralph as a result of an ever-growing demand for his custom models. HTM allowed him to offer his designs to more people at a lower price and accelerated delivery times.

Ralph says the Gun Hammer and Mad Maxx are HTM’s best-selling knives. Both began as full customs, so it made sense to produce them under the HTM banner. For the Gun Hammer alone, HTM offers several iterations in varying blade shapes, finishes, steels and coats.

“The military likes both knives and guns made in the USA,” Ralph notes. He says his Gun Hammer and 18 X-Ray automatic are among HTM’s best sellers with military customers. The company also offers designs by such makers as Kirby Lambert and Greg Lightfoot.

Ralph indicates there is a 23 percent scrap rate for knives made overseas.

“You have to figure in for that rate,” he says of foreign-made knives. By having their knives made in the USA, he reasoned, the HTM brain trust has total control over the processes, and can rectify any production issues that might arise before they become a problem.

When it comes to the advantages of knives made in America, Ralph says U.S. companies have access to the best steel and high-end materials.

It should come as no surprise then that Ralph says there is a huge upswing in companies manufacturing knives stateside. He specifically cited Buck Knives, who has been returning some models to “made-in-USA” status after previously being off shore produced. He also noted a growing trend of custom makers offering mid-tech/semi-production knives.

“They are growing the American market instead of stealing from it,” he observes. “That’s what we need in the knife industry.” 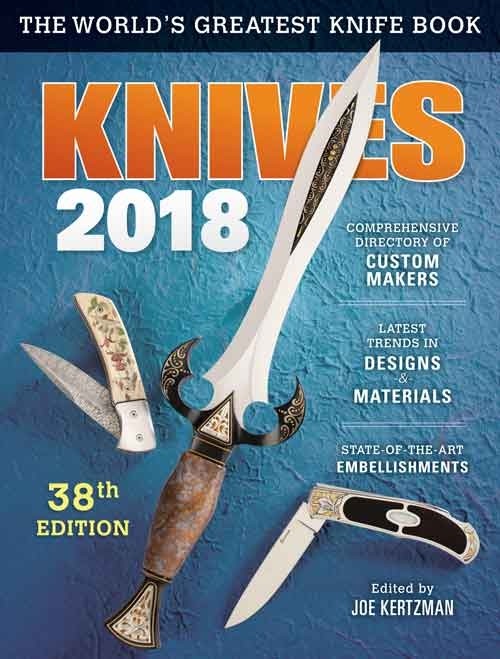