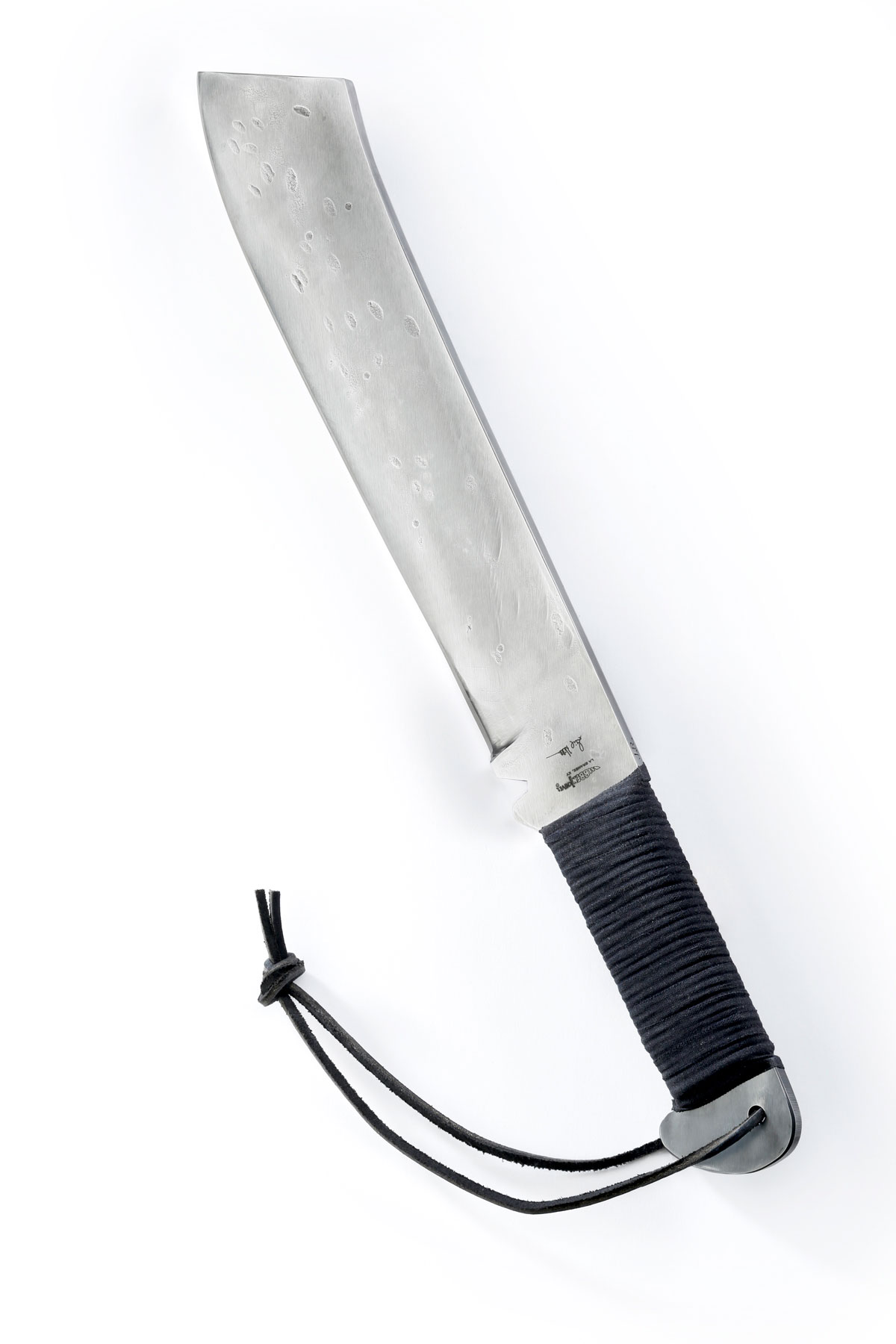 Editor’s Note: This article originally appeared in the February 2008 issue of BLADE magazine, which you can download here.

Over a quarter century after John Rambo burst onto the big screen and changed cutlery history forever, it is near time for the character created by author David Morrell to cut a worldwide cinematic swath with his indomitable knife once again.

As BLADE® was going to press, the fourth installment of the Rambo movie series, Rambo (aka Rambo IV) a Lionsgate film, was due to be released at movie theaters on Jan. 25, 2008. Sylvester Stallone wrote the screenplay, directs and stars in the movie that finds Rambo living a secluded life working as a snake catcher in Thailand some 26 years after Rambo first appeared in First Blood.

The Rambo blades have certainly made their mark in the world of knives. For the first two Rambo movies, First Blood (1982) and Rambo: First Blood Part II (1985), the legendary “Arkansas Knifesmith,” Blade Magazine Cutlery Hall-Of-Famer© Jimmy Lile, created the knives.

A Series of False Starts

For Rambo, Stallone once again called Hibben to help create a new knife for the movie. Stallone had a basic idea of what he needed and the knife was written into the script as an integral part of the movie. Hibben made at least five prototype versions of the piece before finally arriving at the design that will be used in the film.

In October 2006, Hibben began designing the knife. At first, the blade exhibited characteristics of the Rambo III model.

“My first one had a slot in the blade [as in the Rambo III knife] but in a machete or old Chinese sword design,” Hibben recalled. He also made a modified version in which he removed the top lug of the guard.

Stallone reportedly liked the blade design but said it was “too perfect.” He wanted something much more crude looking, as if it had been pounded out quickly from the limited resources Rambo has at his disposal in the movie.

It was back to the drawing board for Hibben.

“The blade size was originally 10 inches and Sly faxed me some pictures of some of the knives he’d seen from the cutting competitions,” the Cutlery Hall-Of-Famer explained. “He liked that style, so I made one up. It evolved from a 10-inch blade to a 12-inch one. It evolved from several sizes and shapes until I got what he liked.”

To make it authentic, Hibben forged the next few prototypes from pieces of a truck leaf spring. Since there was agreement on the basic blade design, next came the question of the handle and finish of the knife.

Hibben thought about what materials might be available to the character in the movie. He considered leather, wood, paracord, tape and even seat-belt webbing for use on the handle. The second prototype had a wooden grip wrapped in green paracord and an enclosed sheath. Hibben also made a third prototype with a leather-wrapped handle.

Again, the studio said it needed something more crude looking.

There’s Crude, and then There’s CRUDE

Prototype number four was a very simple design with a cord-wrapped handle. Hibben made one with green cord and one with black cord. It was close to being right, but the finish was still too slick to have been quickly forged as it is in the script.

Finally, Hibben decided that, considering John Rambo’s skills and experience and the materials that the title character would have available, the knife would have a cord-wrapped handle, perhaps covered with tape for additional grip. The blade would be marked with depressions from the hammer blows from being forged quickly without time or resources to put a fine finish on the blade.

“So I took it out of the heat treat and beat the heck out of it,” Hibben recalled. “I really made it look like Sly made it.”

Following the Rambo knife tradition, it would be a large, heavy blade with a thick spine. Assuming that Rambo would not have time or materials to make a new sheath but would still have the sheath from his previous knife, he opts to cut the end of the old Rambo III sheath to accommodate the larger blade and broader tip of the new knife. This is the knife and sheath in Rambo.

The 12-inch blade is forged from a 3-inch piece of quarter-inch-thick D2 tool steel. As you might imagine, such a knife is somewhat heavy—2 pounds worth—so Hibben made some lightweight aluminum versions for Stallone to use when need be for safety’s sake during filming.

Since the movie was shot in the corrosion-inducing environs of the jungle, Hibben said he put Renaissance Wax on the non-stainless D2 to protect the blade from rust.

“There was a lot of rain there,” he noted. “Luckily they got out before the monsoons hit.”

The cord-wrapped handle is covered with black tape for additional grip. Eighteen inches overall, the knife comes in the modified Rambo III sheath.

At press time (in 2008), Hibben was offering a handmade version of the knife in all the original materials—though with nicer sheaths—for $1,250. It is called the “J.R.” There will be 100 in all, with 25 of them already having been sold.