From Danes to dragons, draft horses and drawing smoke, the axe and the hawk have become avenues of artistic expression for some of the most innovative artisans of sharp blades. Long a trusted and dependable companion on the trail, in the bush, around the camp and in the military, axes and hawks are utilitarian and versatile, both in form for their intended purposes and as striking examples of imagination, innovation and aesthetic appreciation.

Utilizing the best in materials and employing their long study of the axe and the hawk, several makers have produced notable works in recent years, among them Peter Pruyn, Tom Ward, Dave Armour and Bill Burke. Each has his own approach to the craft and adds perspective in producing works of incredible beauty.

“My motivation was to try something new,” related Armour, a knifemaker for about 12 years, fashioning hawks and axes for six years and turning his attention to full-time blade work only seven months ago. “In addition, a small, easy-to-carry axe can be a great complement to a hunting or other working knife. I call my style ‘sufficiently evil and deliberately casual.’ I take the function side of things—like heat treating and edge geometry—very seriously, but treat the rest of knifemaking as a chance to play and have some fun.”

With his Clydesdale Set, which includes both a 12.5-inch knife and a 17-inch axe, Armour’s ingenuity gallops through. The set is made with a single Clydesdale horseshoe that he obtained through his wife’s employment, involving a tour of Warm Springs Ranch in Missouri, home of the world famous Budweiser Clydesdales.

“I used the sides of the shoe for the outer layers of the knife blade and the bottom for the body of the axe,” Dave said. “I wanted something rustic without looking primitive. So, I made choices like leaving the shoe nail holes unfilled and using a simple hardwood for the handles. I used W2 for the knife core steel and 80CrV2 for the axe bit. Anytime you’re using a unique material, it is stressful. If I messed this up, it wasn’t like I could just scrounge another Clydesdale shoe lying around somewhere.”

Armour, who plies his craft in Auburn, Illinois, uses the term “foundwood” for his handle material. Though he isn’t completely sure, he said he believes it is sassafras, liberated from the bottom of a box of cast-off exotic pieces in a local lumberyard.

The finished Clydesdale Set consists of the beautifully forged san-mai blades, foundwood handles, and a stainless steel bolster/guard. The blade measures 7.5 inches while the edged surface on the axe is 2.25 inches. Dave stated he would produce a similar set for $750 or the axe alone for $300—and he would enjoy the journey “tailoring my technique to the piece.”

Forging knives since 1998, Burke received his ABS journeyman smith stamp at the 2003 BLADE Show. “I returned home, quit my job, and have been a full-time maker ever since,” he grinned. His Dragon Tomahawk is nothing short of breathtaking, and he acknowledges that the project was an investment of energy in his Boise, Idaho, shop. “This piece took three months of six- to eight-hour days, seven days a week for me to complete,” he noted. “I have a second piece flying around in my head now.”

The second will be a show-stopper if it compares to the 20.5-inch masterpiece that sports a 4-inch cutting surface of damascus and handle of stout curly maple. “The head is wrought iron and 1018 mild steel forged into the ‘W’s’ pattern,” he commented. “The blade is 1080, 15N20 and 201 series nickel forged together to create my Dragon’s Breath pattern. The handle was first drawn and cut/carved from a piece of red fir, and then, after a few refinements, the pattern was drawn on the piece of maple and the handle made from that.”

Bill has been noted for his quality damascus, and with this piece took inspiration from the work of ABS master smith Joe Szilaski. “All my knives and hawks are forged by me in my shop,” Bill said. “I normally just get an idea of what I want to make and start forging. From almost the first moment that I made the Dragon’s Breath pattern, I knew I wanted to make a dragon-headed tomahawk, breathing fire down the blade of the hawk.”

The dazzling result includes a lightly fire-etched head “because dragons are born in fire and should look that way,” along with heat coloring the blade in niter salts to achieve a purple/blue-and-red coloration before it was welded to the dragon’s head. The teeth were raised from the steel of the head, and the tongue, inlaid into the blade, gleams in 24k gold. Bill indicated he would produce a similar piece for about $17,000, depending on embellishments.

Peter Pruyn was self-taught for quite a while after taking up knifemaking when he lost a valued knife he had carried for years. He later learned the stock removal method from Gene Martin and also attended an ABS bladesmithing class. “That definitely made me a more diverse maker, and it opened me up to forging different types of edged weapons and tools,” he said. From there, he worked with ABS master smith Red St. Cyr, who taught him to forge a tomahawk from a ball-peen hammer.

Through 14 years making knives—12 of those full time—Peter developed an interest in Viking blades, and he has sold a number of pieces on BladeGallery.com. One of his most intriguing works is his 15-inch Pipe Axe with ash handle and 4-inch blade and bowl of hammered twist damascus. He forged the steel from layers of 1070, 15N20 and nickel.

“I was forging an axe for the BLADE Show about seven or eight years ago when I had the idea of making it into a pipe axe, which is similar to a pipe tomahawk,” Peter remembered. “It really only has a larger blade.”

While working on the Pipe Axe, Peter greeted a friend who had come to his shop to work on the electrical setup. “He spotted the head when I removed it from the etchant,” Pruyn recalled, “and immediately claimed it.  I was trying something different on this particular one. I did a very long etching process, and it gave a very deep, rough texture and an antiquated look to the steel. I did the Viking rings on the handle, but I also wanted to put some rings on the pipe bowl to give it a better look.”

The effect was certainly achieved, and Peter successfully tested it using cigar tobacco. “It worked quite well,” he concluded. He said a similar model would run $700.

After recently relocating his enterprise, along with his wife’s furniture business, from Carbondale, Illinois, to Istanbul, Turkey, Tom Ward looks forward to future custom orders. Among these may well be a request for a piece similar to his hefty Dane Axe.

When in design school in Boston, Tom took an elective course on forging damascus and bladesmithing taught by ABS master smith J.D. Smith (see May and June issues of BLADE®). “I really fell in love with the process and the idea of making high-quality objects to last someone’s entire life or longer,” he related. “I also loved the history of it and what you could learn through those venues. J.D. was my mentor for about four years before I left school and Boston. My work was fairly independent until 2017, when I started my degree at Southern Illinois University and spent three years researching damascus steel with Richard Smith in Carbondale.”

One of the most significant results of Ward’s career in steel, the Dane Axe, christened “Halvdan Swung Me,” is based on Viking lore and representative of the weapons Viking mercenaries may have wielded in the service of the emperor of Constantinople, today known as Istanbul.

“The phrase ‘Halvdan was here’ is carved into the bannister of the balcony of the Hagia Sophia in Istanbul,” Ward remarked. “So, he was the inspiration for the piece and the name. The shape is not exactly like any Dane axe but serves the same idea with an angled broad blade and beard, and a thin cross section as most war axes had. The angle of the blade is to deliver a deeper chopping or swinging cut, and it is the same cutting concept as the curve of a saber. The forward point is also hypothesized for stabbing, and the beard for hooking legs and shields.”

Damascus legend Daryl Meier sold the wrought iron, salvaged from a bridge that was torn down in Illinois, for inclusion in the Dane Axe steel combination, and encouraged Tom’s pursuit of pattern welding. The Dane Axe haft, fashioned from sturdy hickory and ash laminate, extends beyond 5 feet.

“The pattern welding on the blade is sort of an East meets West thing,” Tom commented, “with traditional wolf’s tooth from northern Europe and the Persian chain patterns, as well as the Byzantine tendency for geometric patterns with the chevrons.”

These exceptional craftsmen are among many who have explored the addition of hawks and axes to their repertoire. They set the bar high and bring additional interest to another creative frontier. Above: Rudy Dean’s pipe hawk features a 4.5-inch blade of twist damascus and a handle of curly English walnut. The smoke  hole plug is damascus and the mouthpiece and eye cap are ancient walrus ivory. (SharpByCoop image) 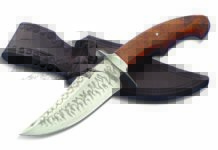